Project participants told us that they ‘discovered’ they were migrants in their encounters with local populations. This was a construction of ‘migrant’ that went beyond the formal barriers erected by states. For some, the realisation that the status of ‘migrant’ was likely to be one carried throughout their lives arose from the reactions and behaviour of those around them. This ascription was made by others regardless of the formal immigration status of our participants. One African participant explained that they had believed themself to be British when they gained citizenship, but this had passed over time due to the experience of continual ‘othering’ and outright racism.

We asked participants about their experiences of being made into ‘migrants’. Alongside the formal practices imposed by the state to segregate and stigmatise those in the immigration or asylum process, we also heard of everyday encounters with local populations that confirmed the demarcation of ‘migrant’. More than one participant ascribed this to racism, explaining that it was the racist response to their physical appearance and skin that made them understand that they were ‘migrants’ and would continue to be ‘migrants’ regardless of any changes in their formal immigration status.

In encounters with local populations, the formal exclusions of immigration control could inform the everyday racism of locals. Both formal and informal processes of stigmatisation and exclusion combined in a continuum of threat. Yet, at the same time, participants occasionally spoke of the ‘niceness’ of British people and the connections that could be formed by participating in the rituals of everyday life, such as talking about the weather. These pleasant interchanges, however, were rarely mentioned. The majority of comments pointed to hostility or a lack of knowledge leading to discomfort. 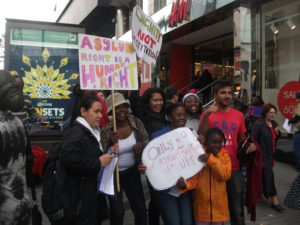