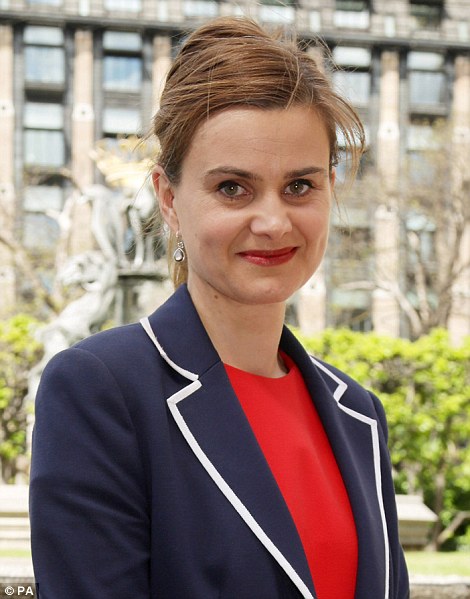 On Thursday, the 16th of June, Jo Cox, MP for Batley and Spen (West Yorkshire), was murdered in front of her constituency office in Birstall, Yorkshire by Thomas Mair, a man with links to the far right in the US and South Africa, who shouted ‘put Britain first’ repeatedly as he shot and stabbed her, and then when asked to give his name in court, said ‘death to traitors, freedom for Britain’.  A day earlier, the Leave.EU campaign (fronted by UKIP’s Nigel Farage) produced a campaign poster showing a group of refugees, with mostly black and brown faces, walking down a road with a slogan reading “BREAKING POINT”. The poster (which exists in a very long line of dehumanising representations of racialized people as a threatening mass) was compared to Nazi propaganda.

The days that followed saw an outpouring of sympathy. The appeal set up by her family raised £1m in four days. The anti-racist charity Hope Not Hate (one of the beneficiaries of the appeal) circulated the #lovelikeJo image and a memorial took place in Trafalgar Square in London. Significantly, there were attempts to put the death of Jo Cox in the context of the inflammatory rhetoric mobilised by the EU referendum, and the history of pandering to anti-immigration views by both main political parties. Difficult questions were, at least, starting to be asked by some commentators about sort of society we have become. Cox’s husband stated that she was killed because of her political views, as someone who was a strong supporter of the UK remaining in the EU and in the UK accepting more refugees – a viewpoint which was vociferously critiqued below the line (there is a separate discussion to be had about trolling and nationalism).  Polly Toynbee pointed out in the Guardian that ‘Brexit supporters have unleashed furies that they themselves can’t control’. In the Spectator, Alex Massie noted that

He also said in the same article that ‘when you shout BREAKING POINT over and over again, you don’t get to be surprised when someone breaks’. PM David Cameron accused the Leave campaign of stoking intolerance and division with their immigration obsession. This is ironic considering only a year ago he referred to refugees a ‘swarm’, and only several months earlier suggested that Mayor of London Sadiq Khan was sympathetic to terrorism, provoking accusations of racism.

Those moments of questioning are a tiny crack in an anti-immigrant consensus. But what will it take for these cracks to be opened wider?

Our research project was inspired by a similar moment when Alan Kurdi’s body washed up on the beach in Turkey in the summer of 2015, even the normally xenophobic Daily Mail. Within the UK and in other European countries, the public mood seemed to change overnight and citizen initiatives sprang up to welcome refugees, and send donations to Calais and elsewhere. This did not last and attitudes hardened again in the months that followed. And here we are today.

So does it ultimately take a tragedy such as the murder of Jo Cox – like the image of Alan Kurdi’s body washed up on the beach in the summer of 2015 – to make us question the normalisation of anti-immigration politics? And how serious will we commit to this questioning: is it enough to simply call, rhetorically for a kinder, gentler politics and go back to the business-as-usual of pandering to fear and division to win votes? In a world of short-term news cycles and short-term thinking we will quickly forget (the way that Cameron might have assumed, when he called for tolerance, that  not so long ago he had promoted intolerance)? Shortly after Jo Cox’s murder, another MP, Yvette Cooper, received a death threat, suggesting that there are limitations to such tragic events to provoke a shift in attitudes in the long term, especially in the absence of strong immigrants’ rights movements to challenge prejudice and discrimination.

These questions will be explored over the next few months in our project as we carry out a survey about how young people use the media to understand global conflict in relation to the refugee crisis, and as we analyse mainstream and alternative media coverage. Will refugees be pitted against EU migrants, or, as some have argued, will it legitimise more resentment towards all foreigners and racialized people? And, like the mobilisation that took place after Alan Kurdi’s death, will social movements to defend immigrants and refugees develop, particularly in the aftermath of a Brexit vote? Updates will be posted here.