One strand of our project sought to understand how audiences consumed news media and how their media use shaped their understanding of recent global conflicts.

We undertook a survey to examine the range of media sources that might be viewed. In addition, we asked survey-respondents about the news topics that they prioritised and their familiarity with news coverage of recent conflict zones.

Participants in our survey tended to consult news media every day and used a wide range of news sources. Although ‘mainstream’ news sources such as the BBC or mainstream UK newspapers continued to feature as regular news sources for these audiences, many chose to access this news content online and/or via social media.

Importantly for our project, participants were keen to demonstrate a critical attitude towards media representations. They spoke extensively of their attempts to compare differing accounts of the same news story and of the need to consult a number of news sources. While our respondents acknowledged the critique of mainstream (and other) news coverage, they remained engaged with news as a media form. Rather than abandoning the consumption of news, we heard accounts of the critical reading and collating practices that were regarded as necessary for any thoughtful consumer of news.

To find out more, click on the image below: 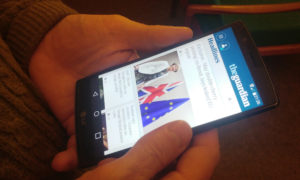